It's Chinese New Year: The Year Of The Rabbit. Bring On The Pineapple Tarts, Green Pea Cookies, & A Dose Of Much-Needed Good Luck!

Yes, that fluffy, cute critter called a bunny is more than a Pagan symbol of fertility; a sly Disney cartoon character named "Bugs"; or the inspiration for those overly sweetened, hallow, crappy-quality chocolate things popular around Easter time. Rabbits also are one of the twelve sacred animals included in the Chinese Zodiac on the Lunar Calendar and beginning tomorrow, February 3rd, the star of the show for the year 2011.

For those of you born in the Year of the Rabbit, according to chineseparade.com (where you can find fortunes for other signs too), the following is a snapshot of you and your love life:
HARE, RABBIT - Born 1927, 1939, 1951, 1963, 1975, 1987, 1999, 2011 (Rabbits of note include: Confucius, Angelina Jolie, Bejamin Bratt, Brad Pitt, Cesar Chavez, Charlize Theron, Chris Cooper, Drew Barrymore, Einstein, Enrique Iglesias, Francis Ford Coppola, Geoffrey Rush, Kate Winslet, Michael Jordan, Michael Keaton, Orson Welles, Rudolph Nureyev, Tina Turner.)

For a more in-depth reading try these sites here and here. I, myself, am a Snake whose year is up in 2013 when all of my personality traits that make me an insinuating, subtle, pushy, double-dealing, scandalous, vicarious, sensuous person of restraint (yeah, I don't get that dichotomy either), as well as a symbol of medicine and healing, intuition and intelligence (now those I like), will come to the forefront. Oh goody...even more internal neuroses to battle with! And I'm not alone in this apparently! According to The Washington Post, Taiwanese fortunetellers are predicting that the Year of the Rabbit "will be anything but cuddly." One such person was quoted as saying, "People think the rabbit is very gentle, but it's not going to be a mild year at all...It won't be a good year. There will be a lot of world conflicts."
So now that you are thoroughly discouraged and the naturally beautiful Rabbits among the population have been outed for their moodiness and gambling habits, what good can come out of all this? Well, for starters: good FOOD!
Chow.com has provided us with a handy breakdown of the 10 Good Luck Foods for Chinese New Year that will get you up to speed on the traditional foods eaten in Asian countries like Hong Kong, Taiwan,  and Malaysia, and throughout the Chinese mainland, in addition to the symbolism behind them (all great, minus the "for bringing many sons" nonsense). Some of these edibles are tangerines and oranges, Nian Gao (粘糕) (steamed, almond/brown sugar cake), pomelo (a citrus fruit similar to grapefruit), and Yuanbao, or Jiaozi (餃子) dumplings. Jai, or Buddha's Delight (羅漢齋), a cleansing, healthy dish of vegetables is also popular and meant to be the starter, literally of the day's culinary delicacies, as well as a metaphor for a fresh start to a new year. Below is a fabulous video for making Jai from scratch:
Courtesy of chow.com
I found some other good New Year eats that are worth sharing from a couple of swell websites. Pig Pig's Corner has a recipe for the Chinese tea/marbled eggs (茶叶蛋) (photo, right) that are prettier than any colored eggs I ever hunted for as a child (no offense Mom)! Then there are the Green Pea Cookies (豌豆酥) and pineapple tarts (黃梨餅) (both photos below) from Doldol & Mochi that are almost too posh to eat, and Egg Wans Food Odyssey's gorgeous Chili Bean Paste Fish and Tofu (photo, left), which is a proper centerpiece dish that treats tofu right and makes it an accompaniment to the fish/pork, not am imitation substitute for them. This nice link from TasteSpotting and The San Francisco Chronicle give even more New Year's tasties to tempt you! 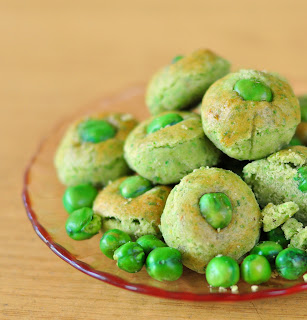 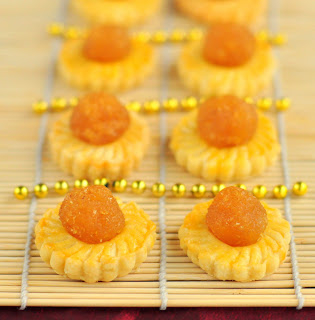 Both photos courtesy of dodol-mochi.blogspot.com
So after all this eating you will need some time to digest before heading out to find some much-needed entertainment and physical exertion. If you are nearby San Francisco on the 19th of February, meet up with me for one of the largest Lunar New Year celebrations in the world that will be happening in our Chinatown. For more details, a really well-done website has been put together to explain in greater detail the rituals and traditions, the cultural significance and history of Chinese New Year, and the story of how those particular twelve animals came to be designated to certain years. My favorite event is always the lion (which represents happiness and joy) dance with the colorful costumes, drums, and gongs that give them an otherworldly appearance.
Bay Area locals Leung's White Crane Professional Dancers at the Genting World Lion Dance Championship - Courtesy of sfwhitecrane.com
Gung Hay Fat Choy!
("Best wishes and Congratulations. Have a prosperous and good year!")
Posted by Erica Slaysweeet at 3:00 AM