Yup, yup, that's right. One of the snazziest and most original places to try tasty dishes in the Bay Area is not at a restaurant...it is at the SF Underground Market! One part indoor/outdoor food court that uses only freshly prepared, high-quality ingredients; one part slightly illegal, D.I.Y. resistance movement against the bureaucratic, corporate-run, food vendor governance board that says people cannot sell homemade dishes in a public venue without a license.
On one hand I understand the food safety regulations. With all the media attention of late on e.coli poisoning from commercially sold, pre-washed, fresh spinach and spoiled peanuts making people sick, I can see why the powers above would want to regulate things more closely. I actually am all for that in terms of large-scale, high-output, pesticide-based food producers whose sole aim is to make money. That goes too for the corporate supermarket chains that figure bright lighting and manipulative advertising will be enough to distract the shopper from the reality of how their company operates: to treat food as little more than a commodity to be bought and sold, regardless if the quality is shoddy, the product tasteless, and all of its soul sucked out so that it can live indefinitely on shelves without any feeling left.
This leads me to my other hand, which says that the food we eat was (hopefully) once living and full of flavor and nutrients. It should be respected; it is going inside our bodies after all where it will either return the favor of kindness, or wreck havoc in bitter retribution!  If you give your food a little love, it will give it back. So what does all this have to do with an "underground market?" Well, I truly believe that an event like the one I attended back in early February is a place where everyone involved (and there were hundreds of adults, children, and even a few dogs in attendance) understands my call for the defense of food with or without Michael Pollan's encouragement. Dishes were made with care and creativity using real food ingredients. And while it is true that the same things can be said for the selections at your neighborhood farmer's market, there is still a lot of red tape even at such "alternative" food venues that a small-scale food maker has to deal with if they want to get their products out to the public. Maybe they just want to do a test-run of their dishes in a smaller setting before launching it into a full-fledged business. Maybe they want to turn a rewarding hobby into a fun way to make a little money. Each vendor had a food story and they should be able to tell it.
Here is the mission statement from the SF Underground Market's website: "To sell at a farmers market, you need to produce your wares in a commercial kitchen. This is an impossible expense for many of us, so The Underground Market is about helping to get some exposure for all of our fellow producers who for whatever reason aren't able to get into a legit market. These are veterans, people who've been making their products for years, but only able to share them with friends. We thought we'd give them a venue to share with the whole SF food community. A market, and a live show, all rolled into one. Think a farmers market, but with music and drinks." 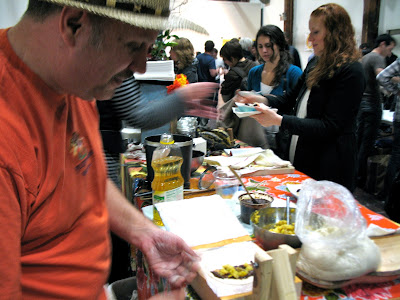 One such vendor I met was a man named Eric. He told me that the market was the first time he had made his delectable Empanadas de Mole for more than three people at a dinner party at his house. Well, lucky for us that he has come out of the shadows into into the limelight...his booth was one of the most popular spots all night! He brought his own wooden press to squeeze the corn masa (dough) into shape, which he filled with mushed platanos (plantains: a larger, savory cousin of the banana); homemade mole sauce (chilies, spices, garlic, onions, and a hint of chocolate) from a recipe of a friend who hails from the Oaxacan region of Mexico where mole originates; and all the ingredients were folded into a package and topped with fresh carrots, beets, and imported Mexican queso duro (a rich, hard white cheese). Delicious! 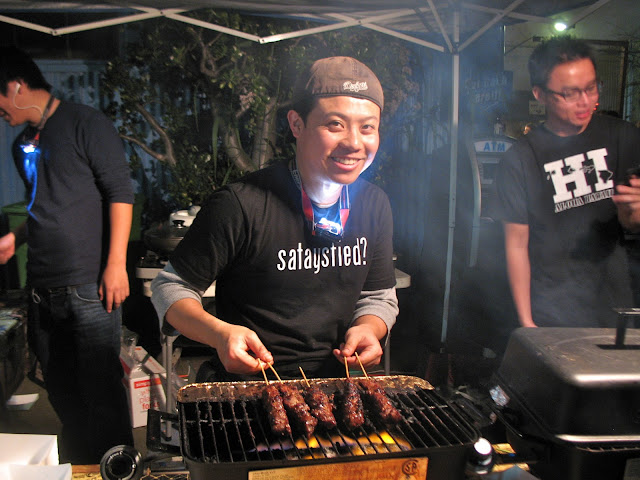 Another favorite of mine (and every meat-eater there) was a stand called Sataysfied run by a super-friendly guy named Feldo wearing a LED headlamp around his neck to be able to properly see what he was doing outside in the dark. I stood in a long line for his pork, chicken, and combo  skewers because I love satay and the rumor was that this booth was the best of the night. I was not disappointed - in fact I was blown away! I sampled the pork version. The Thai-style BBQ sauce was spicy and tangy and salty and sweet, all coating pork strips so tender I had to force myself to chew slowly to prevent scarfing it all down in one gorgeous bite! I also appreciated Feldo's hawking call that asked passersby to buy his satay so he could pay his month's rent. I admire an honest man who prefers to treat food with affection and be broke, rather than to just slap some generic sauce on meat and call it gourmet in order to overcharge yet another gullible customer. Sataysfied has a website, a Facebook and Twitter page, and can be found at food markets and outdoor festivals around the Bay Area. For Heaven's sake help Feldo pay his rent so he can keep making satay!

**UPDATE 3/6/11** I just got word from Feldo himself that Sataysfied has been chosen as a vendor of Off the Grid Fort Mason (an off-shoot of the hugely popular, mobile food vendor event Off the Grid SF), which is starting up on March 18th. There is also some Sataysfied T-Shirt merchandise in the works! Congrats Feldo...we'll be seeing you again soon! 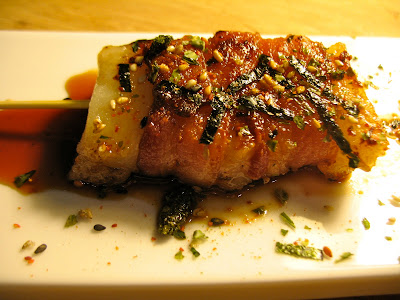 Then there was the bacon-wrapped mochi on a stick by renowned chef Jordan Grosser whose day job now is starting up his own cheese company called Flosa Creamery. Mochi is a Japanese food made of glutinous rice that is pounded to form flat cakes of dough, and prepared in both sweet, as well as savory dishes. I have tried mochi bundled around ice cream and baked and puffed in soup. I have never however seen it combined with bacon, but man, was that a good idea! Grosser accessorized his munchie with  sesame seeds, seasoned flakes of seaweed, and a sweet/salty sauce that saturated beautifully into the rice patty. Yum!


More to come. Check back in a few days for the finale of this performance, which includes dessert!
Posted by Erica Slaysweeet at 11:27 PM