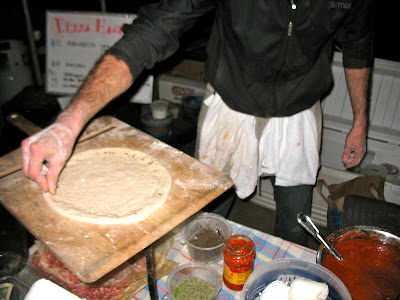 And now we will continue on our little "underground" food journey and a visit to a few more vendors that were especially impressive at the SF Underground Market...starting with some wood-fired pizzas made in front of us on a table outside, and cooked in a modified oven made out of a pea-green grill and concrete hood. Pizza Hacker is the name of the business; Jeff Krupman is the man in charge (see his crust-stretching skills left). They had two options: "Marinara" (local, organic Heirloom tomato sauce; fresh minced garlic; oregano; Reggiano Parmigiano) and "Margherita" (same sauce; fresh basil; fresh cow mozzarella; same Parmesan; olive oil; alder wood-smoked salt). What was also nice was that you could add extra toppings such as that same smoked salt, pickled peperoncini peppers, a really good salami, or Calabrian chili paste. 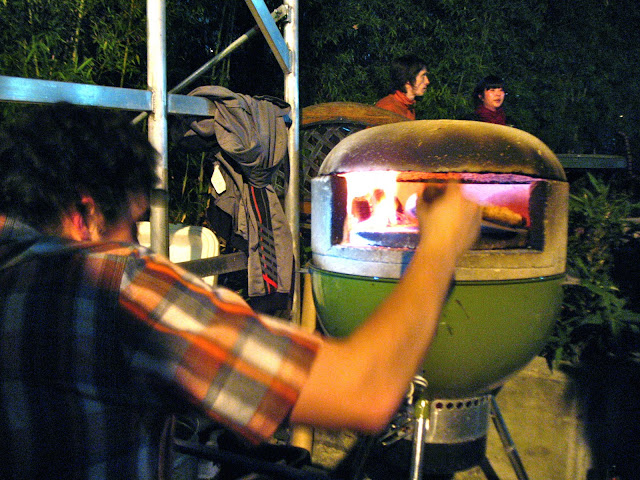 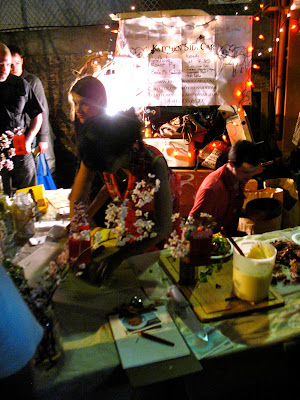 Next is Katie Kwan's (in the center of photo at right) Kitchen Sidecar, which is all about recreating food as it is eaten around the world in its natural element. Kwan, like myself, thinks that food is so much more than putting calories into our bodies; she wants to recognize food as culture and therefore as something that involves "histories, experiments, op-rants, science, recipes, and hopefully some good writing and discussion." The night of the Underground Market she paid homage to the traditions of such places like Hawaii and China by serving pork sandwiches that came from a whole roasted pig that was prepared on premises! Wow!
Then there is The Grilled Cheese Guy, Michael Davidson (see photos below). His business even has a Facebook page. Davidson and his boys served up yummy burgers and, you guessed it...grilled cheese! They used all types of cheese that added a complex flavor and an unbelievable salty, stinky-yet-mouthwatering, "cheesy" smell. They also devised a clever way to get even browning on the bread using foil-wrapped bricks to weigh down the sandwich as it sizzled away in the pan. Their burners were set up in a semi-circle around their main greet-n'-eat table where the long queue started and where people were lined up for a twenty-minute wait just to place their order. Good thing it was worth the wait! 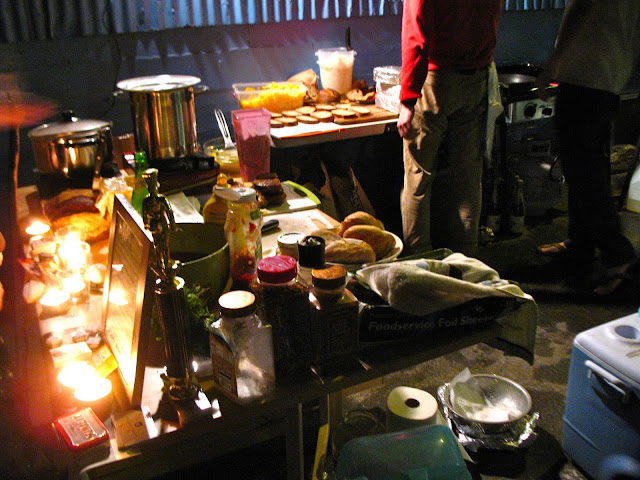 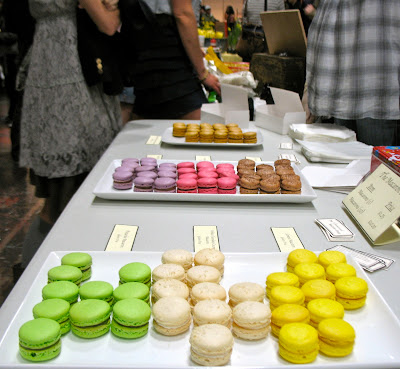 Back inside, dessert awaited! The Occasional Macaron Shop was definitely a highlight! The macaron is a French cookie, well actually it is a smooth cream sandwiched between two soft cookies that seem to meld into a kind of jelly when you bite into them. At Occasional Macaron's table they had gluten-free flavors like lemon, pistachio, raspberry, white-chocolate coconut, and salted-butter caramel. They made the trip up from Palo Alto to be at the Market so if that is a little far for you to travel, you can also find them on their Facebook and Twitter pages where you can get a glimpse of all their pretty colors. Just look how beautiful they are!
Then there was the crowning jewel for me. A woman named Courtney Dougherty has spent half of the last year blending and tasting to perfect a dessert made with either coconut, chocolate or peanut butter cup that is a little bit cake and a little bit pudding, all cooked up in a half-pint, glass Mason jar. What is for sure is that all three of her flavors contain banana, which has a texture that folds in deliciously with the other ingredients. Dougherty calls her creation Bake it Banana and that night at the Underground Market was the big premier of her business, and boy was it a success! She is still in the early stages of the marketing and distribution of her product so keep an eye out for her banana desserts because as soon as she has her own storefront, people will be lined up outside her door! 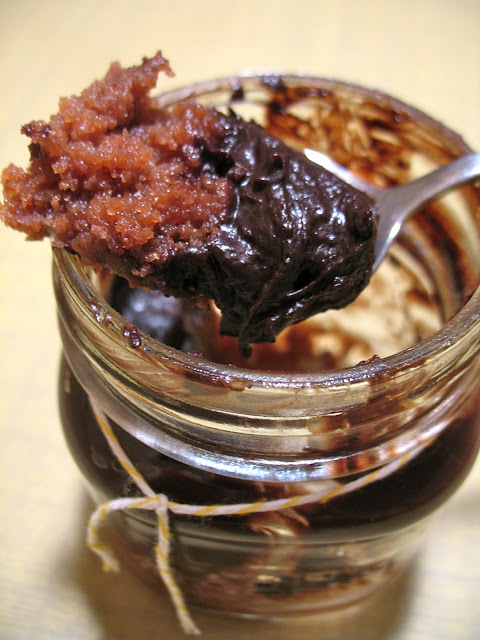 Chocolate and bananas go very well together!
Posted by Erica Slaysweeet at 1:16 AM