Today's Perplexing Produce are innovative flavors of chips (the American, not U.K. kind), which I know are not produce in and of themselves, but they are able to be made from a cornucopia of fruits or vegetables and therefore qualify as produce in my book. Specifically, I want to look at chips that actually made me stop in my tracks when I saw them in the store recently. The first types I will talk about are from a company called Greenday (a company out of Thailand dedicated to sustaining their national produce, not the California Punk band), and come from two of my favorite fruits and vegetables, both of which I ate a lot of when I lived in Brazil: taro root and jackfruit. 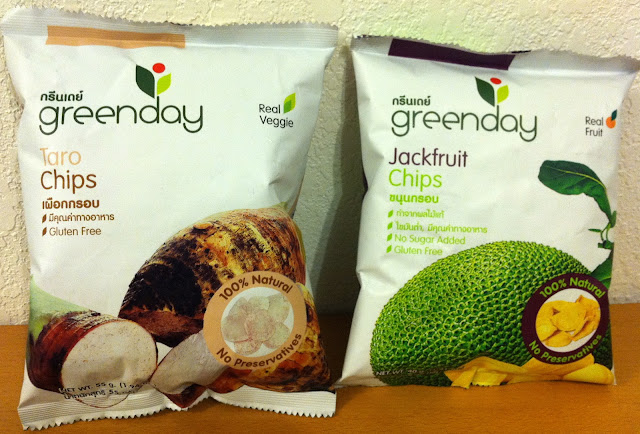 Taro (also known as puak in Thailand, aipim in Brazil, and kalo in Hawaii where it is used to make poi) is a kind of tuber that grows in tropical climates. Its outer layer is rough, hairy and dark brown (kind of like a coconut, or a peccary or javelina) and has skin that has to be removed before eating, as it is toxic to humans. For all that, the flesh on the inside is white with the similar starchy texture as a potato, but with a slight lavender-purple color to it and with little rings and flecks of purple that become more distinguished as the taro cooks. It has a bit of sweetness to it and is used in dishes ranging from simple chunks boiled with salt, to French fried-style strips, to sweet cakes, to a popular (and my favorite) flavor of bubble tea (known also as pearl or boba milk teas). Taro is often confused with yucca or yuca (also known as cassava,  manioc or mandioca in Portuguese). It is a healthy carbohydrate full of fiber, vitamins C, E and B6, as well as having many significant ties to cultural heritage around the world.  Here and here are more info on taro.

Jackfruit (called jaca in Brazil, chakka in Malaysia, kanun in Thailand, and kaṭ-hal or kaṭa-hal in Hindi-speaking India) is a truly unique food from the tropics. It looks a lot like the infamously foul-smelling durian fruit, but is much less pungent, with firmer flesh (not custardy like durian), and is sweeter. When you crack open this intimidating, giant, spiny jackfruit, what you find inside are compartments filled with what resemble soft, yellow, flower buds. Many people say that the texture of the dense inner parts of jackfruit, which have a fruit leather consistency and are difficult to tear, remind them of cooked chicken so it therefore is sometimes used as a meat substitute, often in Asian markets. To me, jackfruit looks and smells like flower petals, albeit ones made of thick and super tough fruit flesh, so I do not get how they can pass for meat, but I guess if I lived in a place where other imitation-meat products made from tofu, seitan or textured vegetable protein (TVP) did not exist, jackfruit may be convincing. Among other nutritional benefits, jackfruit has fiber, vitamins A and C, iron, and calcium. According to Greenday's package, "The Chinese believe that ripe jackfruit not only aid water thirst but also react against hangovers. In addition, it can help digestion and acts as an energy booster." Jackfruit is believed to be the largest, edible tree-born fruit in the world and is the national fruit of Bangladesh. Try these links here and here for more reading on jackfruit. 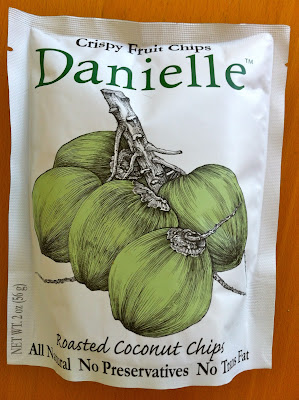 The third piece of produce that some creative person used to make a chip, is the multi-talented coconut. Now I know that almost everyone has heard of coconut, but usually only in a form that is finely shredded and sugared, as coconut milk, or to flavor a fluffy dessert or dayglow-colored cocktail. Coconut water is becoming trendy (thankfully, since it really is healthy for you), and some people who have visited a tropical locale have seen a fresh, green coconut split open so they could eat the soft insides (something I did on a regular basis in Brazil and Costa Rica). But I have never before seen coconut that is thinly sliced, slow roasted with a little salt and sugar, and then flashed baked using vacuum pressure into crispy chip strips...until now! That combination of savory, sweet and crunch (without heavy oils) is both refreshing and addictive. A nifty company out of Boston, MA called Danielle started making these fancy chips in 2004, and since then have won several food awards for their products. Coincidentally enough, Danielle also makes chips out of taro and jackfruit, as well as durian! The ones I really want to try next though are the okra chips. Who'd a thought it? In addition, they sell other lines of foods including dried fruit, peanut nuggets (peanuts wrapped in sweet or savory pastry), and what they call "crispy rolls" that are rolled-up sheets of pastry playfully flavored as everything from Barbeque and "Veggie 'n Seasoning," to Cream Custard and Sweet Green Tea. Yum, yum and more YUM!


PS..If you are curious about durian fruit and do not believe me when I say that it stinks, check out the video below for a  (slightly) scientific illustration of someone who tested it out for himself.

Posted by Erica Slaysweeet at 9:54 AM