MY Version Of California Pizza Kitchen!

It's true, I'm not a California native. I was born in Ohio but when I moved to the Golden State almost twelve years ago, I immediately felt at home here. One of the attractive things about California and particularly in the San Francisco Bay Area where I live, is the open-mindedness and creativity that people here and on the West Coast in general have towards food. It is so culturally diverse where I am that every city block has a different ethnic cuisine on its corner. It seems natural then that folks who like to eat would be exposed now and again to an unfamiliar South Asian spice, or a hearty grain from Ethiopia that they had never heard of before. No wonder people got curious and started to mix food ingredients together from opposite ends of the planet - hence, California Fusion. 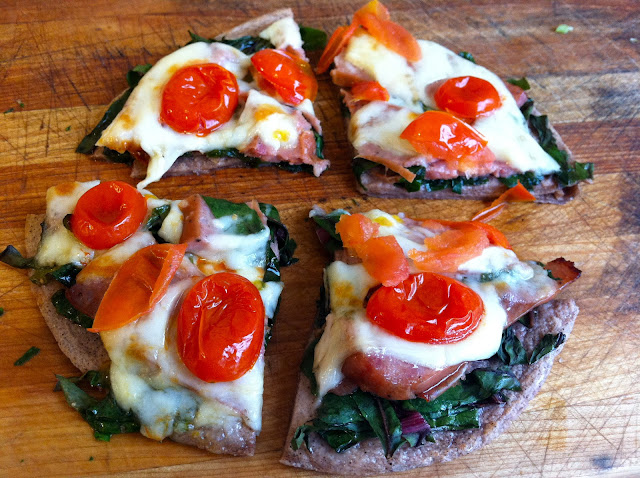 I too have felt at home combining flavors that did not all originate from the same geographical food locale. Now that said, I am a huge advocate of eating local, but there are just some things you cannot get from a growing area within a 300-400 mile radius of your home. I also think you can find equivalents in your region to ingredients used in a dish whose roots are far, far away. For example, let's look at what I made for lunch today: a "pizza" that has little-to-no connections back to its Italian roots! I took two blue corn tortillas from Mi Abuelita Bonita Tortillas (made an hour and a half away using healthier ingredients), layered on top with shredded, organic red chard out of my bi-weekly box from the CSA (Community Supported Agriculture) Farm Fresh To You, slices of Niman Ranch Kentucky Bourbon Uncured Sausage (a ranch just north of San Francisco that raises and slaughters its animals as humanely as possible), part-skim Mozzarella from somewhere in California, and organic cherry tomatoes from Jacobs Farms/Del Cabo Cooperative in Mexico near the California border.

Now I realize that I am very fortunate to live in a place where fresh produce and other quality food items originate, but I think every community has specialty edibles in their own state's backyard. Go to farmers markets or find an ethnic grocery store in town and experiment with something you've never tried before. Take a favorite dish and come up with new ways to cook it using unconventional ingredients. Have fun!

PS...Here is the recipe for the pizza above:

Posted by Erica Slaysweeet at 1:09 PM