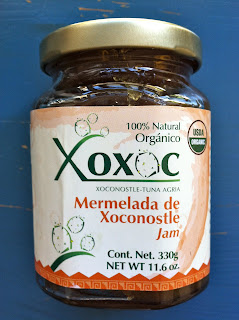 Howdy folks! Sorry I have been a bit absent, but as I now live in a new town, I have been busy scoping out the unfamiliar surroundings, taste buds first. Something fun I found in a local grocery store here was a jar of prickly pear marmalade jam from Mexico - a perfect subject for the Perplexing Produce column! I have seen prickly pears in Latino markets and well-stocked grocery stores, but I have never tasted them so I could not resist the chance to experiment with them as a sweet condiment for the whole wheat crumpets that I also bought at the store that day. It was an excellent choice!

So what exactly is a prickly pear?

It is the fruit of the Opuntia cactus that is also called "nopales" (from the indigenous Nahuatl word nōpalli), or "paddle" cactus, and it is native only to the Western Hemisphere and specifically in the Southwestern regions of the United States and throughout the drier parts of Mexico, but has adapted to grow in other parts of the Americas, in parts of Europe and even in arid areas as far north as British Columbia, Canada. In Spanish, the prickly pear fruit is called "tuna" (derived from the name of the cactus), or "xoconostle" in Nahuatl, and the spiked green pads are called "nopalitos" (meaning "little nopales"), which are also a popular ingredient in many Latin American dishes. Prickly pears have nutritional benefits as well, including having high levels of calcium and potassium, and may help to clot blood and lower blood sugar overall. It is sold in the dried vitamin section under the name "oputunia." 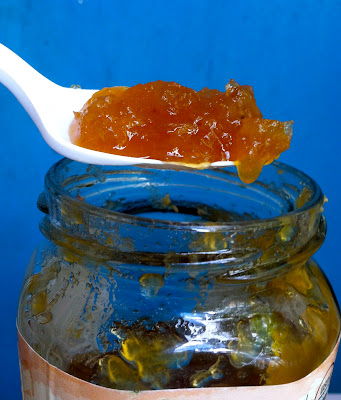 In edible form, I have seen the prickly pear featured in Mexican aguas frescas (literally "fresh waters") and as an intriguing flavor in a hip cocktail before, but I have never seen it on a shelf in a glass jar, so I was pretty excited to give the jam a go. Next I am hoping to tackle making my own recipe from the fresh fruit using the instructions here. The jam was unlike any I have had before. It was pretty watery (but not in a bad way) with little chunks of soft fruit, and it did have a pear-like flavor, but with a strong dose of citrus that puckered my mouth. The smell and yellow-orange-red color reminded me of peaches combined with d'Anjo pears and a healthy squeeze of lime. It did work okay on my crumpets, though I think the thinner consistency would lend itself better as an ice cream topper, mixed with a thicker Greek yogurt, or blended with another fruit and your choice of dairy or dairy-like beverage to make a smoothie. I also found the strong citrusy flavor a bit strong on its own (and I love citrus), so I think next time I will eat the jam in one of the other variations that I mentioned. Regardless, I am glad to tried this Perplexing Produce and hope you will too!
Posted by Erica Slaysweeet at 10:06 AM