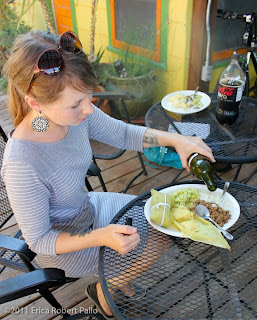 All of you who has been reading this blog know that I very obviously love food. Many of you also know that I love everything connected to film (especially when it is about food): the cinema, film making, cheezy movies, film theory, etc. Read my posts here, here and here to see some of those examples. Over the past year or so I have produced several movie projects about food, culture and social media as a way to marry my loves (check out my Vimeo page is you're interested in seeing them), and I plan to continue on with this in my future work. As further proof of my commitment to the world of cinema, I begin a graduate program today in Film & Media Production at the University of Texas in Austin. I therefore appreciate fellow filmmakers who are equally fascinated by food as a valid film subject and will be highlighting some of their work in more blog posts. So who should I talk about first?

Let's start with local Austinite Christian Remde. The local paper here wrote an article about him that caught my eye because it talks about his upcoming documentary that looks at what really gives restaurant workers their energy to get through every bustling late night: staff meals. After checking out his website, I found several other cool short films. The first is called  "Charcuterie," which is about that lovely art of curing meat. Check it out underneath these words.

The other flick is called "Farm to Trailer" that looks at food trailers in Austin, a subject close to my hungry heart. Below is that documentary. Bon appetite!

Posted by Erica Slaysweeet at 12:05 PM