We're Back, And We Have A Valentine To Give You To Make Up For Our Absence

I know, I know, I've been neglecting you fair readers...but I'm reformed now, and I baked you a quiche and other stuff to make up for it. Graduate school for film production has a way of eating up (sorry for the pun) all of my free time, and since scriptwriting requires a lot of that precious time as part of my program, I feel guilty if I ever feel like writing something else just for fun.Well, no more! A gal has to have a hobby too! So with no further adieu, let's get to another one of my creative outlets - cooking - and what I made on a whim (sorta): QUICHE! Smoked chicken, green cauliflower, corn, aged cheeses, fresh cilantro & mint, in a whole-wheat crust quiche to be exact. 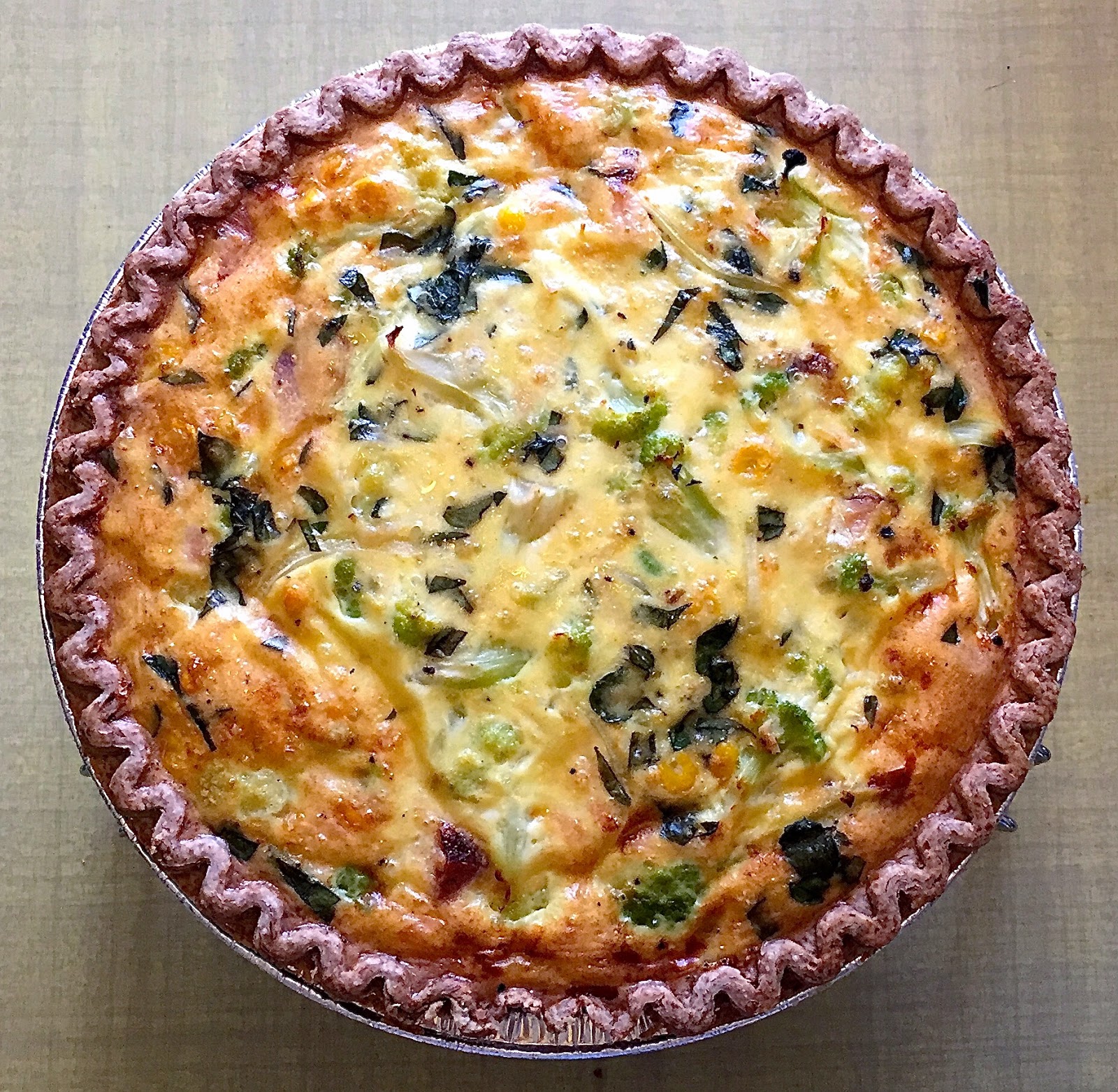 This was my first time making quiche and I have yummy Chef Jaime Oliver to thank for steering me in the right direction in terms of the egg-to-(soy)milk ratio and cooking time. I trolled through several of his quiche recipes online and found a happy medium of 5 large eggs, 1 pint of unsweetened soymilk and 55 minutes in the oven. (This equation didn't end up being completely appropriate, but I'll get to that later.) I already had some filling ingredients in the house that I wanted to use, so I built the rest of my recipe around those.And what's great about quiche is that it's portable as a filling, energizing meal between classes when I don't have time to get back home to eat. It also makes a unique Thank You present or in honor of today, a Valentine. And, it's quiche, so it's delicious!


Here's how it went...
I set the oven to 350-degrees F. While it heated up, I whisked together the eggs, soymilk  and salt & pepper in a big bowl. Then I folded in the shredded cheese. Cheese can get expensive, but if you buy a small amount of the quality aged kind, the strong flavor will go along way in your cooking, especially when it's melted and blended into something like a quiche.In more specialty grocery stores they will often have leftover pieces of cheese that they wrap and sell for a few dollars. I set the "wet" mixture aside.

I put a small pot of water on the stove and set it to high. Once it boiled, I used it to blanch the
veggies.I got a colander ready in the sink so that I could quickly drain and rinse the veggies when they were finished blanching.

I pulled the whole-wheat crust out of the freezer and placed it on a baking sheet on the counter. Don''t leave them on the stove because as the oven heats up, it will defrost the bottom of the crust faster than the sides. 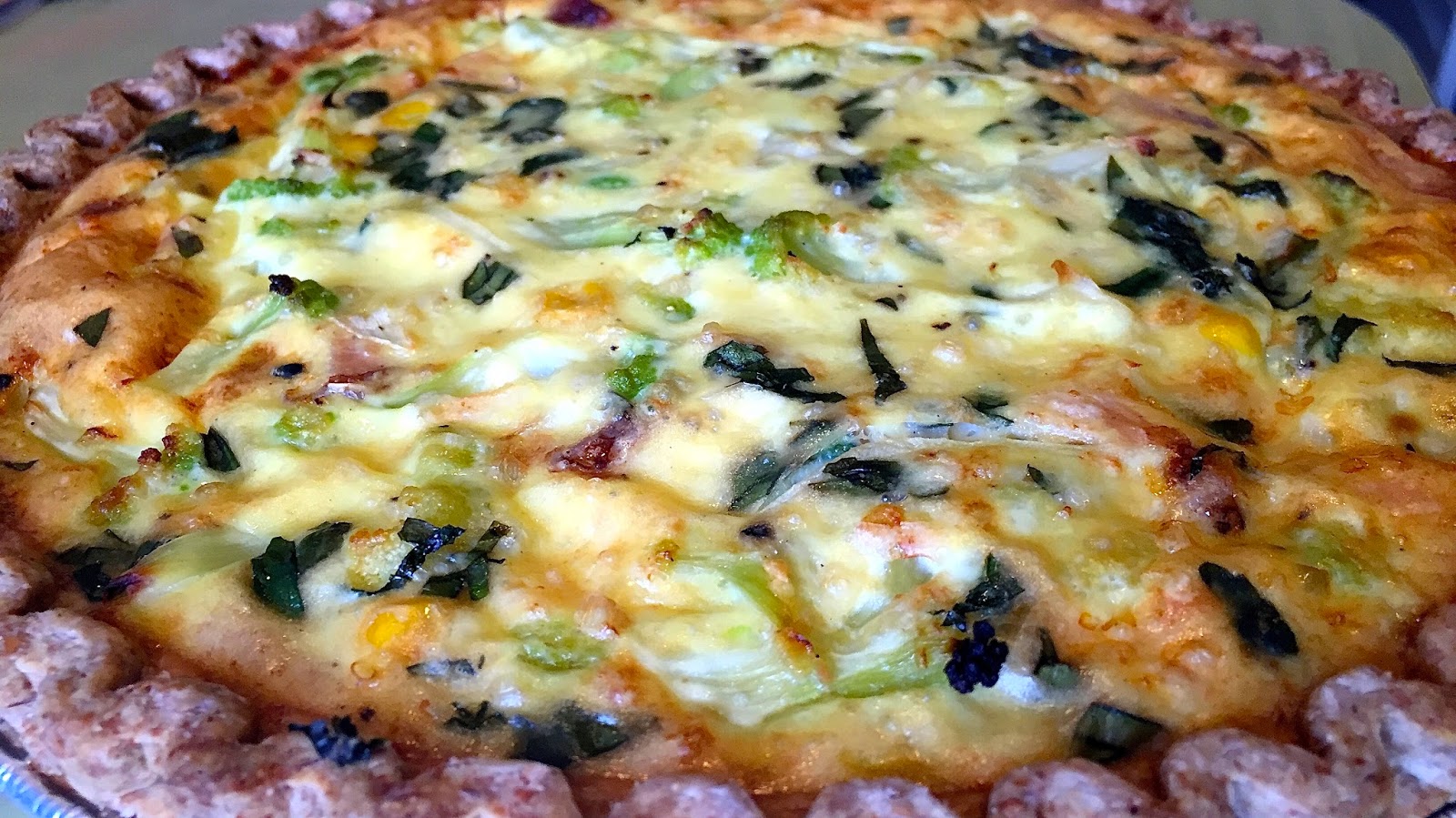 I  already had a smoked chicken leg that I bought for a few bucks at Whole Foods. I pulled all the meat off, shredded it and tossed it another big mixing bowl. I added the extra skin and bones to some veggie scraps in a plastic bag in the freezer. I'm always saving leftover bits so that eventually, when the bag gets full, I make stock from the contents. And this stock is more flavorful and cheaper than anything bought in a store. Next I added the onion, garlic and fresh herbs to the bowl.

Then I cut up the green cauliflower, yes, GREEN cauliflower, also known as "broccoflower" since it's actually a broccoli/cauliflower hybrid created in California in 1980. I dropped the green goodness into the now boiling water and turned off the heat. Next I put the frozen corn in the water and immediately dumped all of the contents into the colander in the sink and rinsed with cold water to stop the cooking process. For blanching, you only want to let fresh veggies sit in boiling water for a few seconds, or long enough to turn them a brighter version of their natural hue and remain al dente. The corn only needed to defrost so I waited until just before I drained the pot to add it to the boiling water. Once the veggies were well drained, I added them to the other "dry" ingredients in the bowl.

I sprinkled in more salt and pepper as I mixed everything together. Then I dumped the dry mixture into the pie shell and and carefully arranged it so that one side didn't have more ingredients than the other side. Finally, I poured in the liquid wet mixture over the dry, stopping when it reached just under the rim of the shell. Anything with eggs in it tend to expand in the oven, so never fill a vessel/crust all the way to the top or it will spill over as it cooks. 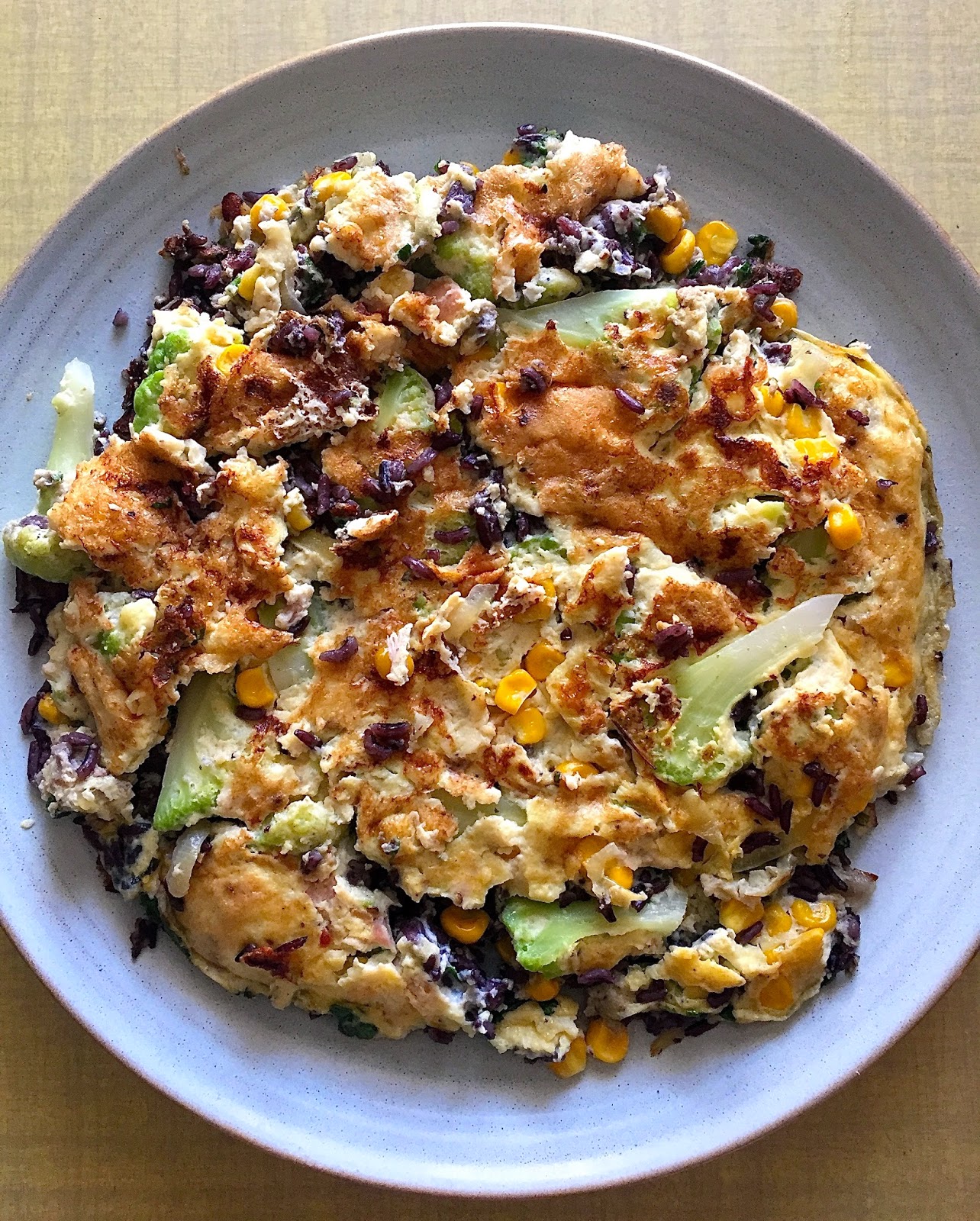 Turns out that  I had figured in too much soymilk and eggs for the recipe and I had about a cup of wet mixture left over. This ended up being a "happy accident" though because I made what I'm coining an "American frittata". A regular fritatta is like a large, pan-baked Italian omelet that usually has pasta cooked into it. Well, I didn't have any pasta made already, but I did have some gorgeous Blanca Isabel PURPLE rice in the fridge and I used that instead. This particular rice is cultivated in Louisiana hence, the "American" in the name "American frittata". It cooks and tastes like long grain white rice, but also naturally contains high levels of antioxidants not normally found in white or even brown rice. 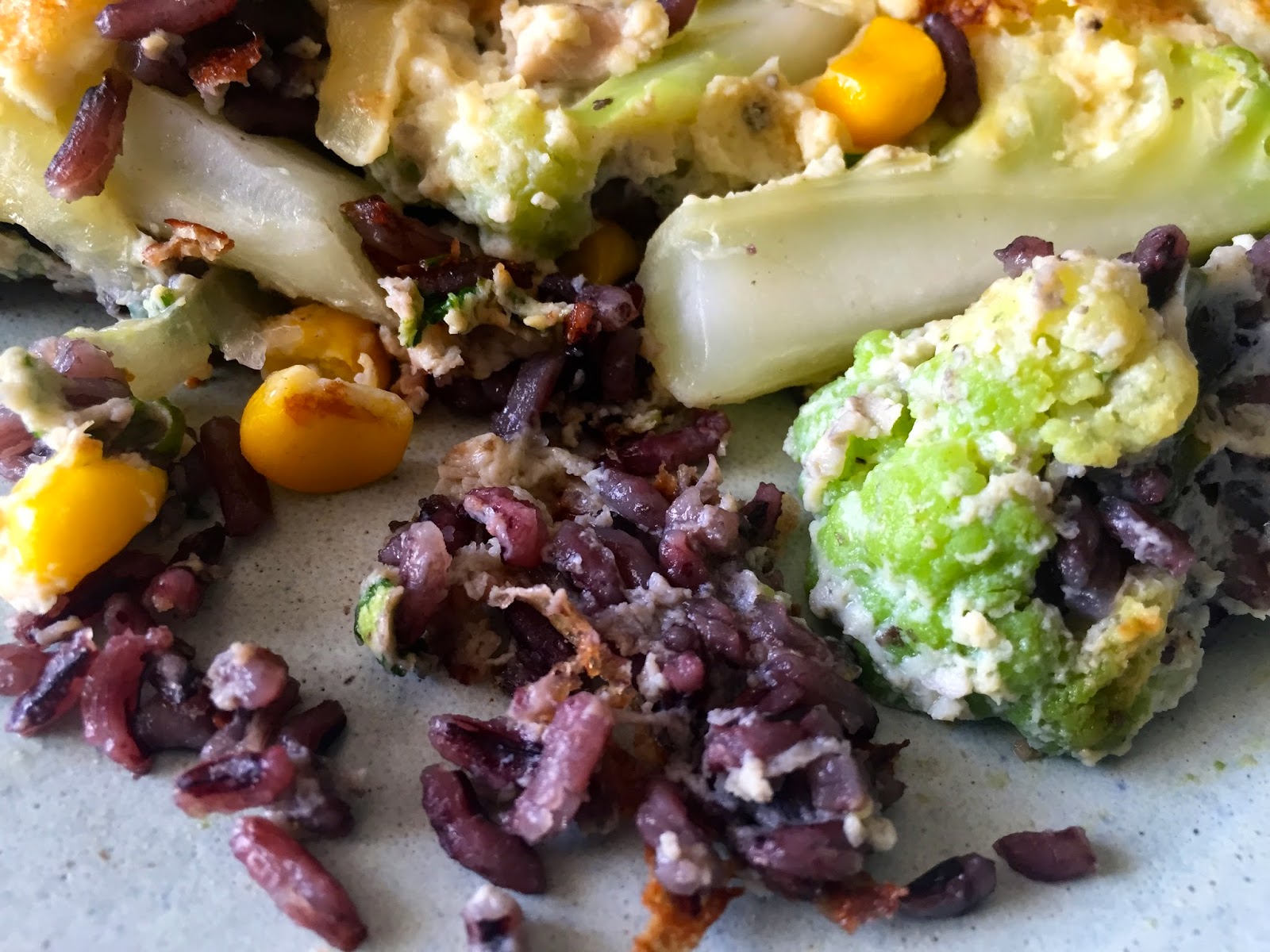 Ok, back to the quiche. It baked for 55 minutes, but I would suggest setting the timer for 50 minutes and checking it. If the middle barely jiggles when you gently nudge the pie pan, then it's ready. If it moves more like Jello, then give it 5-7 more minutes. Insert a knife or toothpick into the center to be sure it' finished cooking. If it comes out clean (meaning no liquidy residue) you're good.

Let it cool on a rack or propped up on something that will allow air flow to the bottom of the pan so it cools uniformly. It's best to wait at least 30 minutes before cutting into the quiche to make sure the egg/milk mixture has had time to fully solidify into shape. 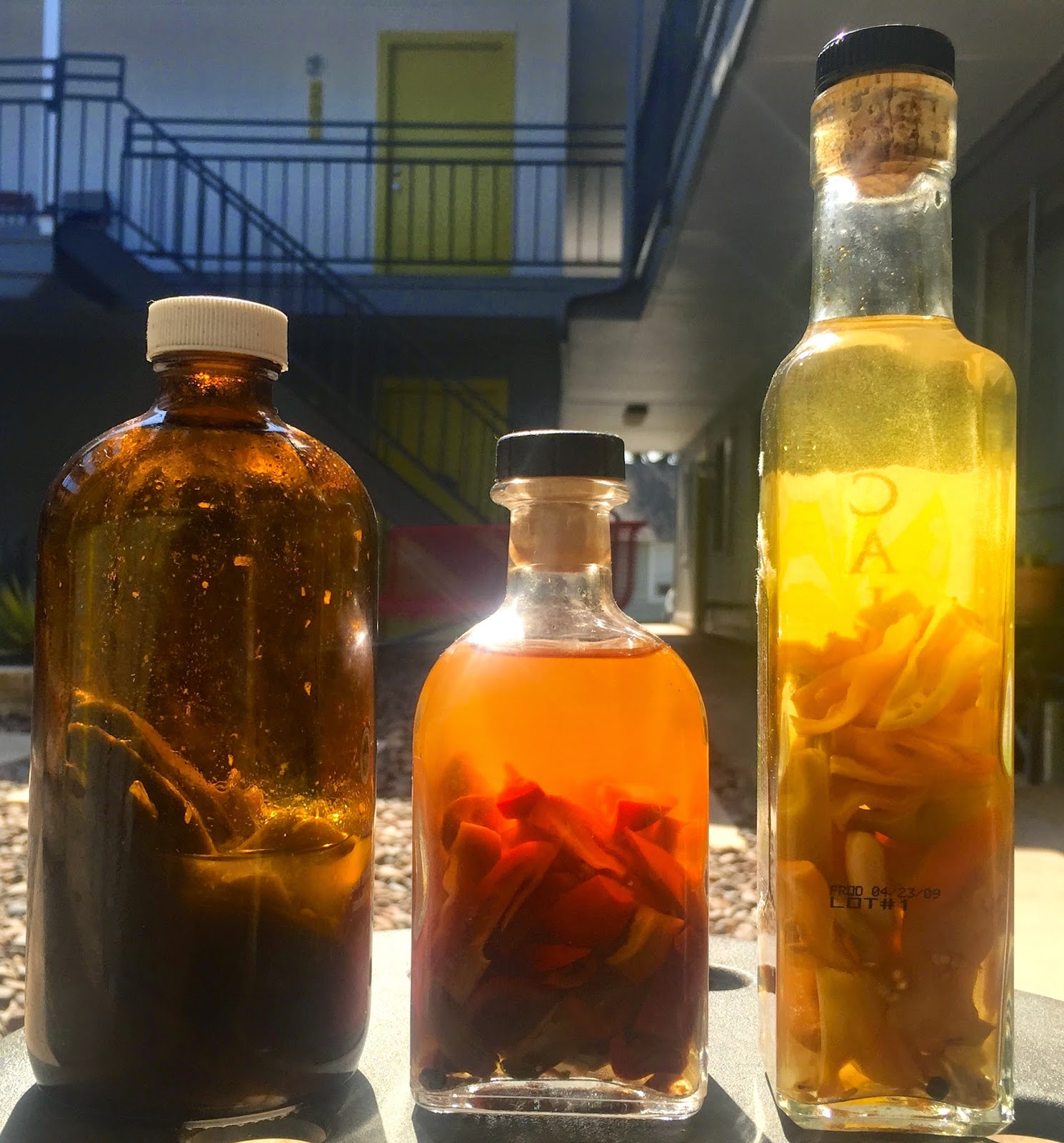 Top your slice of quiche (and American frittata) with hot sauce, a squeeze of lime, and/or sliced avocado.I make my own hot sauce and I made a big batch last summer when my apartment building had a wide variety of chili peppers growing in our courtyard. I reused fun-shaped bottles that once contained vinegar, oil or kombucha. I like hot sauce that's heavy on the vinegar so it's actually super-easy to make since you just add boiling vinegar and salt to whatever is in the bottle (I'll cover my process in a later blog post). Since I used a diverse selection of chilis, my vinegars took on wildly different colors and flavors. Check out a few that I made to the left.

Alright, there you are. Eat quiche and be happy!