Achy Breaky: It Ain't My Heart, Just My Stomach From Too Much Good Eatin'! (Austin, TX Part 2)

Ok, so I am sort of lying because in fact my heart was left in Austin - the bombardment of permanent food trucks, the surprisingly good Tex-Mex food, the 24/7-live music, the art, the laid-back attitude, the acceptance of healthier living, the dog-friendly laws, the university, the heat (yes, I like it!), the smiles I saw everywhere, the general higher quality of life - but since I have a commitment as a full-time student in Berkeley, California for the next year, commuting to/from east-central Texas is a bit of a stretch! So to appease my restlessness until I can return to The Music Capitol of the World I will just have to look at all my photos, gush with others here who share my infatuation (and there are lots of you because I have already talked to a lot of you), and try to re-create some of the yummy dishes that I sampled there. On that note, let us wait no further to see mouth-watering pics of yet more of the delicious life that is Austin, Texas! 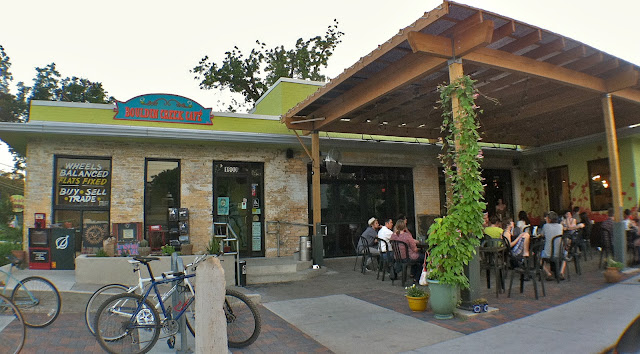 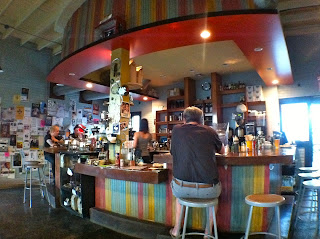 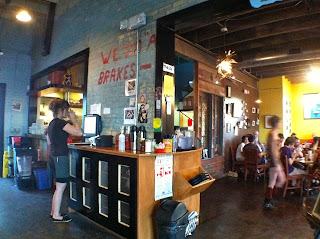 Believe it or not I was a vegetarian for ELEVEN years and although I am a full-fledged omnivore now for a number of reasons, that does not mean I do not appreciate food free of any meat. Bouldin Creek Café on South First Street is a good example of veggie food (and the accompanying lifestyle) done right on several levels. First, their menu has a lot of creativity and variety and does not just rely on imitation meat (though fake stuff is tasty and I do like some good gluten patties now and again) to replace the texture and flavor of animal protein. Instead they find interesting combinations of ingredients that do a good enough job of energizing your palate that the meat is not missed. Take for example the chipotle-pecan pesto in the "Joe's Smokin' Omelet." I also greatly enjoyed the iced coffee I got infused with lavender syrup! Second, this building used to be a brake shop for cars! Part of living a more environmentally conscious existence (which vegetarians purportedly support) is reusing, recycling and refurbishing, so it is nice to see that much of the industrial interior skeleton was left in place and other arty accessories added to make it an inviting, well-loved atmosphere. Then there is the exterior patio, which brings me to the last part of why this is a swell place to hang out: the Great Outdoors! Tree hugging aside, vegetarians are also often urbanites who are usually confined to the Concrete Jungle, so time spent eating out-of-doors is limited (though in Austin the weather lends itself to more outside seating than in many other cities). That is where the café's sweet patio comes in. I also really like warm temperatures and lounging outside with a good buddy and/or my dog Miles, sipping coffee and snacking on whatever temps my fancy that day over good conversation or my laptop in front of me (so I can write these blogs). At Bouldin Creek Café they indulge all of my needs!
Another stop that had a nice outdoor patio was Z Tejas on Sixth Street. I am not particularly fond of chain restaurants but put me at a big table with good company, filling food and a frosty beverage, and all my anti-corporate inhibitions float away. That probably makes me sound like I am wishy-washy in my political leanings, but actually it just means that I have learned over the years that I need to pick my battles against The Man in constructive ways. Fighting against a formulated, but well-executed, menu is not one of those ways! Anyway, as I was partly in Austin to search out their Brazilian population as part of my upcoming Anthropology senior thesis project, I was pleased to find a cocktail at Z Tejas that involved the trendy, yet ambrosial, açaí berry from the Brazilian Amazon. Well, the açaí (pronounced "ah-SIGH-ee" in Portuguese) was actually infused into a liquor, but it added a unique flavor nonetheless. The cocktail had a silly name ("VeeV Spa Cooler" after the VeeV Açaí Spirit), but was refreshing with cucumber and lime juices, and fresh mint. Good times!
And for the grand finalé I will talk a bit about my school project and the Brazilian food that I got a taste of in Austin, which was the first stop on my year-and-a-half venture to finishing my undergraduate education. Inspired by a documentary I made with two other ladies last semester about how Brazilians living in the San Francisco Bay Area preserve their cultural heritage through food, I will continue with this theme but go on the road (literally) and interview Brazilian folks living in other US cities. For more info on my project check out The Gringa Eats Brazilian, the blog I started to visually chart my journey.
So back in Austin, my wonderful and patient friend Harley and I made a trek out to a restaurant on the east side of town called Rio's Brazilian Café to talk to the owners and of course, EAT! Elias Martins (Brazilian) and his partner Ben Googins (American) are the duo who run the whole show at this fantastic café, and they are super approachable, fun, creative, and into promoting all that is great about Brazil. Oh, and they make darn good Brazilian cuisine with some American adaptations too! Harley and I decided to go for as much variety as possible so we could get a comprehensive sampling of the menu. We settled on a selection of salgadinhos (appetizers/finger foods) that can be seen in the photos below. We tried "Bolinho de Aipim de Carne" (yucca root pastry stuffed with ground beef, garlic, Serrano peppers, and scallions, then rolled in toasted yucca flour and deep fried); "Empadão de Palmito" (baked savory cupcake with hearts-of-palm, olives, sweet peas, mushrooms, and carrots); "Bolinho de Aipim de Queijo" (yucca root pastry stuffed with smoked Gouda cheese and roasted red pepper, then rolled in toasted yucca flour and deep fried); and the quintessential Brazilian salgadinho, Pão de Queijo (cheese bread). These ones had the added bonus of a dusting of grated Parmesan cheese on top! For dessert we had maracujá (passion fruit) mousse dolloped on a chocolate brownie-like cake, as well as rice pudding with coconut milk!

Well, I guess it is safe to say that I thoroughly enjoyed myself in Austin and cannot wait to go back (University of Texas Austin for graduate school - hint, hint), so if anyone has their own stories of this splendid city, feel free to share them in the comments field or on The Eatable Life's Facebook page. Meanwhile, you can find me with my dog facing the sunshine at some café's outdoor table, wrapped in a sweater and scarf (since summers in the Bay Area are laughably chilly), swigging tea or coffee and nibbling on something finger-licking, and with a big smile on my face as I soak it all in!
Posted by Erica Slaysweeet at 9:19 PM