Some Days A Gal Just Needs An "In-N-Out" Burger!

As a woman not born in California, or on the West Coast for that matter, I was not raised on certain restaurant food traditions that out here are considered institutions. In Cincinnati, Ohio we have long-standing chain restaurants such as Frisch's Big Boy (Cincinnati's first year-round Drive-in since 1948), and the iconic Gold Star Chili  (since 1965 and of Jordanian roots) and Skyline Chili (since 1949 and of Greece roots) that the city is famous for, but I have rarely seen such devotion and local rock star status as what In-N-Out Burger evokes in its fans. In 1948 it became California's first drive-thru hamburger joint, has a sorta old-fashioned Drive-in feel to it, has a "waiter" with a headset and clipboard standing outside at the drive-thru to get car orders and keep the line moving, and has become stuff of Pop-Culture legend ever since it opened. 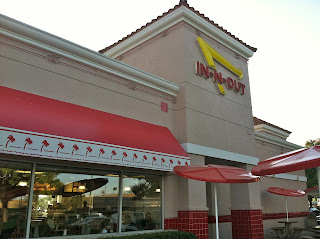 I was doing a video/photo project recently out in the hills above Stockton, CA this week and on our way back to the Bay Area, my colleague and I knew we would be passing by an In-N-Out location and could not resist its allure. In fact, we talked about it on the drive up there and then on the way back as the restaurant neared, got as giddy in anticipation as kids on a school field trip. This is especially uncharacteristic of me as I am not what you would call an advocate for fast-food chains, but In-N-Out is one of those special cases that I allow myself to indulge in. I rationalize my indiscretion because they use 100% beef (without weird fillers), avoid preservatives, and do not reconstitute anything from frozen blocks of what used to be food. They also have a "secret menu." "What is that?" you may ask. Well, the secret menu is one of the novelties - some say urban legends - that has made In-N-Out such a draw in recent times. It basically is an unadvertised list of cooking instructions and condiments that customers have to already know and request at the register when ordering. There are some simple add-ons that are published on In-N-Out's website, but other menus compiled and tested by die-hard connoisseurs have also sprouted up.  Here and here are two of my favorites and what gave me the suggestions that I used when I ordered. 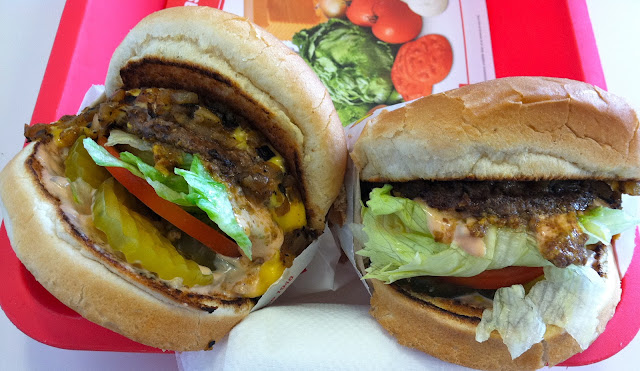 And what did I get? As you can see above, I got two (one on left in the photo with cheese and one without) hamburgers "animal style" (a "mustard grilled" patty, extra Thousand Island-type spread, extra pickles, lettuce, tomatoes, and grilled onions that are saturated in the beef juices). "Mustard grilled" is when mustard is literally grilled into both sides of the patty while its sizzling on the grill! On the advice of the DIY secret menus, I also added spicy chopped chilies (what looked like yellow banana peppers) to mine and SHIZAAM, they were friggin' delicious! Admittedly, I only ate one hot and saved the other for the next day (something I normally would not do with a burger), but since it requires a road trip for me to get to the closest In-N-Out, I was willing to make an exception. Anyone else have other menu choices they would like to contribute? If not, take a look at mine and let the cravings begin! 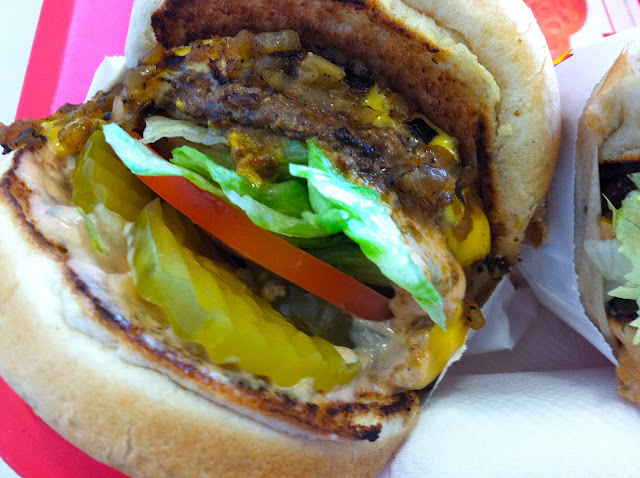 Posted by Erica Slaysweeet at 4:45 PM